12/10/2015 - Walmart's policies have sent 400,000 jobs to China since 2001, a new report conservatively estimates. The report from the Economic Policy Institute describes the process through which Walmart, the world's largest retailer, serves as a key conduit of Chinese products being introduced to the American market.

Key findings from the report:

China invests hundreds of billions of dollars in efforts to bid up the value of the dollar and other currencies, lowering the costs of Chinese exports to the United States and other countries. Suppression of labor rights keeps wages down, making Chinese-made products artificially cheap. Walmart serves as a major conduit of cheap products into the United States. 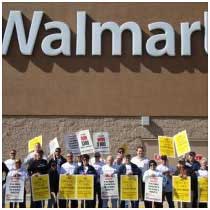