We are very pleased to announce UFCW 8-Golden State has reached an excellent new tentative agreement with Safeway and Vons in Northern and Central California.

“At the bargaining table we were able to build on the key achievements of decades of Union Solidarity,” President Jacques Loveall said. “This contract is one of our best ever, a big ‘win”’ for Union members.”

Details will not be released until members have had the opportunity to review and ratify the tentative agreement. These details will be explained to affected Safeway and Vons members at informational meetings and in a special edition of the Voice of Action magazine. This publication also will include a mail-in secret ballot so members can vote to ratify their new contract.

Ballots will be counted and results of the member vote will be released in mid-August.

Meanwhile, negotiations are continuing between UFCW 8-Golden State and other Union-affiliated supermarket companies in the region, including Save Mart/Lucky/FoodMaxx/Maxx Value and Raley’s/Bel Air/Nob Hill/Food Source. UFCW 8-Golden State is also in negotiations, along with other UFCW Unions in Southern California, to reach agreements with grocery chains in that part of the state. 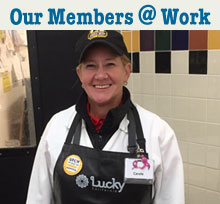